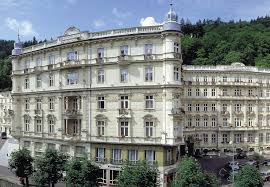 The famous Grandhotel Pupp was originally built in 1701 by Lord Mayor Deiml. At the time, it was known as Saxony Hall. Saxony Hall laid the foundation for this incredible hotel. The hotel continued to achieve great success over the years and it became the envy of many.

The Pupp family acquired the adjacent Czech Hall which was built at a right angle to Saxony Hall. Czech Hall also achieved a lot of success as a hotel throughout the 19th century. At this time, Czech Hall was run by the Pupp brothers.

In 1890, the Pupp brothers gained ownership of Saxony Hall. The two halls were combined into one hotel under the name “Grandhotel Pupp”. The modernization of the hotel took place in the 1920s. In the 1930s the Pupps family acquired the final building that forms the entire Grandhotel Pupp today. The hotel was known as “Grandhotel Moscow” from 1951 to 1989. In 1989, the name was changed back to Grandhotel Pupp.

Grandhotel Pupp is located in the town of Karlovy Vary. Karlovy Vary is a spa town in the heart of the Czech Republic.

The hotel’s unique architecture means every room has its own unique design. This is a really intriguing feature since you can have a different experience every time you book a different room.

The hotel has all the modern features you would find in a modern hotel. It has 228 rooms in total equipped with modern bathroom amenities, a mini-bar, internet access, and many more. You can choose between smoking or non-smoking rooms and between king or twin bedded rooms.

The hotel offers daily maid service and round the clock room service. In addition, some rooms can be modified to have a second bedroom upon your request. The hotel also offers to modify the rooms to fit the needs of physically challenged guests.

As mentioned earlier, Grandhotel Pupp is located in the spa town of Karlovy Vary. This makes Grandhotel Pupp a premier spa destination. The Pupp Royal Spa covers an area of 1300 square meters.

The hotel features steam baths, a sauna, an ice fountain, and a relaxation room on the lower part of the building. The floor above features a relaxation pool with a few thematic pools. You can also have these amenities for your own private use if you book a Royal Spa Suite. It has a whirlpool, a private sauna, and a massage tub and bed.

The Grandrestaurant Pupp is the main dining area. It offers a wide variety of winter, summer and seasonal foods that you can choose from. In addition, you can enjoy the best vintage wines in this restaurant. The restaurant is usually open from Wednesday to Sunday.

Becher’s Bar is the place to go for a drink. It opens at 6 pm and it has a wide selection of wines, beers, and cocktails. You can also spice the night up with a trip to the casino. You can also have a drink at the Mala Dvorana. This is a lobby bar that features 19th-century architecture. It is a great place to sip some whiskey or some tea as you admire the architecture.